What I learned about branding from The Daily Show 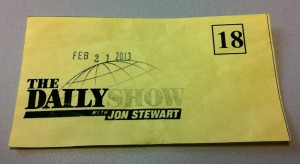 Recently my wife and I took a quick getaway trip to New York City. The plans were focused on our primary activity – going to a live taping of The Daily Show with Jon Stewart.

The experience made me appreciate the excellent job The Daily Show has done in building it’s brand. It got me thinking about how they went about that process, and about the characteristics that make it so successful. Here’s what they do that works.

Know your audience
The Daily Show went on the air in 1996, and Jon Stewart took over hosting duties in 1999. That has given them plenty of time to get to know their audience and what they expect from the show. Feedback comes from Nielson ratings, website visits and social media sharing of content. It lets the show know who is watching, and which material resonates with viewers.

Be clear about what you offer
My wife reserved tickets online at their website in December for a late-February taping. The confirmation email told us where to go, where to get discounted parking, when to show up, how the check-in process worked, and what was allowed and not allowed in the studio (absolutely NO photos). We dug a little deeper and found that Yelp reviews gave us really good insight about what to expect.

Scarcity makes the brand more desirable
Because of the show’s popularity and the high demand for tickets, they always overbook seating beyond capacity. They made it clear there was a good chance we could be turned away at the door if we didn’t follow their procedures as directed. There was no way we were going to let that happen. We showed up over an hour early, standing in line on a cold, wintry New York City sidewalk. I think some people who showed exactly “on time” at 2:30 ended up not getting in. 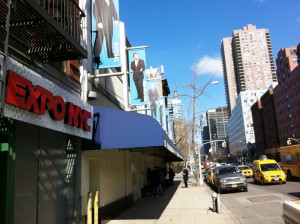 Make sure your fans are well cared for
The area near the door where the first attendees wait the longest was covered by an awning. While it didn’t do enough to block the chilly northwest breeze blowing off the Hudson River, it certainly would have protected us had there been rain or snow that day. Every few minutes, as new people arrived, a staff member explained the process to get  show passes and instruct ticket holders to return promptly at 4:30 to go through the security checkpoint (like at the airport) to enter the studio. I think they also use that time to check out the crowd, and would have gladly removed anyone who was creating a problem for the rest of the guests in line.

Any employees that interact with your customers should be helpful and friendly
Every staff member we encountered was courteous and polite. Emptying your pockets, getting bags searched and going through a metal detector is never a fun experience. But this wasn’t like dealing with the TSA employees who always seem either bored, annoyed or drunk with power. The staff smiled. They looked you in the eye in a welcoming way, not with suspicion. They understood that you were there to laugh and have fun, and did what they could to encourage you to enjoy yourself.

Build excitement
Once everyone is seated, a comedian came out to warm up the crowd. He joked with audience members, and coached us on how loud we would need to clap and cheer during the live taping. After about 10 minutes, Jon Stewart came out and took questions from the audience. As it turned out, a group of student from William & Mary College, Jon’s alma mater, had driven up from Maryland for the day to see the show. In Jon’s self-deprecating way, he was able to make a direct connection to their lives. The rest of watched and enjoyed his brilliant comedic talent as he came up with split second funny retorts. Finally, the show was ready to start.

Give them what they expect
The Daily Show is on Comedy Central, so you expect to laugh. Political humor poked fun at obstructionist Republicans in Congress and Obama’s murky legal guidelines for using drone strikes. A “Special Report” with regular contributor Jessica Williams ridiculed a small group of Texans who wish to secede from the US because they, “Want a place where everybody can worship freely as Christians.” The guest was journalist Steven Brill, author of the Time Magazine article, “Bitter Pill: Why Medical Costs are Killing Us.” The show alternates topics that can be funny or serious, and Jon ran this serious discussion beyond the normal time available during the 22 minutes of air time. During the interview he made one of his characteristic jokes about there being Jews in Florida.

Reward your brand’s biggest fans with a little something extra
Contributor Aasif Mandvi was live in the studio for his report, but Jessica Williams report was prerecorded. After the live taping ended, Jessica was in the studio standing not far from my seat, and Jon called her to the front to introduce her to the crowd. Many TV hosts wouldn’t have bothered.

Let your fans know how much you appreciate them
As the show ended, Jon thanked the audience for coming to the taping, and you felt like he really meant it. I think a big part of his appeal is that he can confidently talk to actors or world leaders with complete comfort, and then admit that he’s just a little jewish guy who makes jokes on a comedy network. The respect that he shows to his guests, his audience, and seemingly his staff makes everyone feel at ease. His popularity suggests that the formula is working.

Managing your brand and building a loyal following is no easy task. I’m sure there have been parts of the production and live audience process that The Daily Show has tweaked over the years. The key is to understand what your fans want you to provide, and making sure you deliver.

I welcome your comments.

With over 30 years of working inside and outside printing, promotional and marketing companies, Jamie Bradley helps clients source and produce great marketing materials. He writes these occasional blogs to share ideas on how to create better and more effective products.